Increasing fluid intake is a well-documented intervention to preventing kidney stones in adults. However, patients’ adherence to their health care providers’ hydration recommendations regularly ranks below 50%. To increase adherence rates and reduce common perceived barriers to fluid intake, a team of researchers at Penn State Health Milton S. Hershey Medical Center, Penn State  and the University of Texas at Austin are turning to technology.

The team developed and tested an intervention called sipIT, a context-sensitive reminder system that incorporates a wrist-worn sensor (Fitbit Versa watch), connected water bottle (H2Opal) and self-monitoring through a custom JavaScript smartphone application. The system proved successful with a majority of participants in a three-month feasibility study.

The research brings hope for helping patients make long-term behavioral changes that can prevent the recurrence of kidney stones. “We recommend adult stone patients to drink between 90 to 100 ounces of fluid a day to achieve a urine output of greater than 2.5 liters of urine a day, although sounds easy to do, patients have a hard time with it,” said urologist Dr. Necole Streeper with Milton S. Hershey Medical Center.

The team—which includes Streeper, David Conroy, PhD, from Penn State and Edison Thomaz, PhD, from the University of Texas at Austin—began developing sipIT in 2016. Team members first evaluated available smartphone technology and its effectiveness in developing behavioral change techniques. Next, the team conducted a needs assessment to determine which technology patients would be most likely to use.

“Patients told us they were most interested in using commercially available technology that they already owned, and a majority wanted to use a device on their wrist,” Streeper said.

To test the feasibility of wearable technology, the team developed an algorithm that detects when a person wearing the Fitbit Versa makes a drinking motion. The accelerometer and gyroscope sensors inside the device transmit that data to the Fitabase data management platform.

“It worked well in the lab setting, but when we tried it in a clinical base, we found the accuracy of detecting drinking behavior wasn’t as high as we wanted it to be,” Streeper said.

That led the team to add another tool to sipIT — the H20Pal-connected water bottle that automatically tracks fluid consumption. The bottle allows providers to track patients’ water intake by volume. The team also created an option for patients to manually enter their fluid intake through the sipIT app. The app is designed to alert patients when their fluid intake is too low. 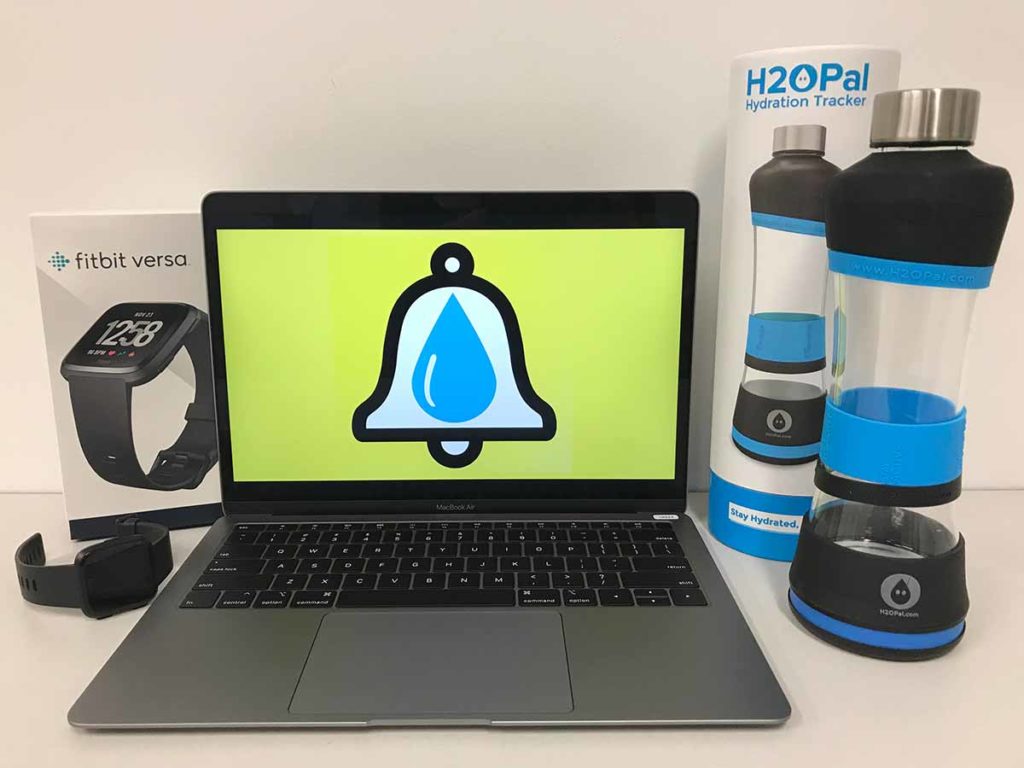 A Fitbit Versa, H2Opal hydration tracker and a laptop all help kidney disease patients properly hydrate to prevent the recurrence of kidney stones.

After assembling sipIT’s components, the team completed a three-month study to determine the feasibility and acceptability of the intervention in the clinical setting. Thirty-one adult patients (age 18 or older) with a history of kidney stones enrolled in the trial. Enrollees received a Fitbit Versa watch with the sipIT app installed and the H2OPal connected water bottle, and they were asked to complete a questionnaire to determine perceived barriers to increasing fluid intake at baseline, one month and three months.

In May 2020, the team won Best Poster at the American Urological Association’s virtual 2020 annual meeting. Now, the team is determining whether sipIT can help to improve urine output. To test that theory, the team is performing another clinical trial with 24-hour urine output as a primary endpoint.

“We set out with a goal to create a semi-automated tool that could provide just-in-time feedback to help adult kidney stone patients make lasting behavioral change, and that remains our primary objective.”