The First Baby Study: A Prospective, Longitudinal Investigation of the Relationship between Mode of First Delivery and Subsequent Fertility 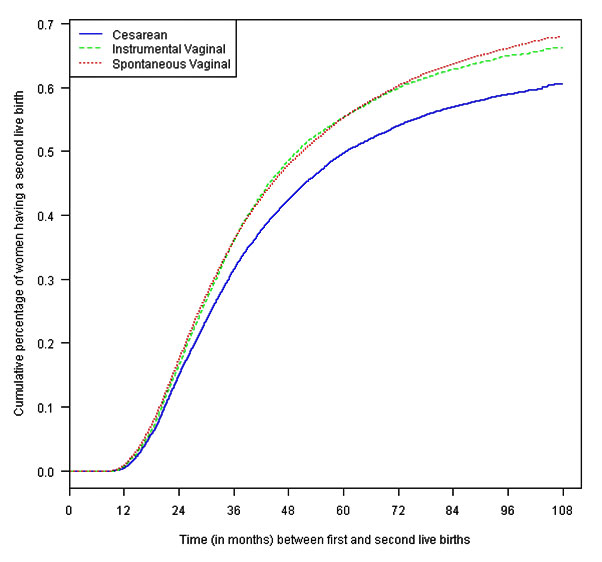 Data from retrospective study conducted 2000-2008 with reported deficits in childbearing subsequent to Cesarean delivery, prior to the First Baby Study. Cumulative percentage of women who had at least one further live birth over eight to nine years follow-up after first birth.1

While retrospective studies conducted in countries throughout the world have reported deficits in childbearing subsequent to Cesarean delivery (including a study conducted from 2000 to 2008,* see figure), the First Baby Study (FBS), conducted by researchers at Penn State Hershey Medical Center, is the first prospective interview study designed specifically to investigate the effect of Cesarean delivery on subsequent childbearing and understand why the post-Cesarean fertility deficit occurs. More than 3,000 women were interviewed during their third trimester, and again at one, six, twelve, eighteen, twenty-four, thirty and thirty-six months postpartum. These women delivered between 2009 and 2011 at seventy-six hospitals in Pennsylvania, and approximately one-third had a Cesarean delivery. The primary goal of the interviews was to measure factors related to subsequent childbearing – including marital and relationship issues, use of birth control, subsequent pregnancy intentions, unprotected intercourse over the three years of follow-up, and difficulty conceiving or carrying subsequent pregnancies.

The study participants have completed the final three-year follow-up interviews. Principal investigator Kristen H. Kjerulff, Ph.D., and colleagues are examining the primary endpoints of the study: pregnancies and live births in relation to mode of first delivery (Cesarean or vaginal). The investigators hope to obtain additional grant support to extend the study to seven years of follow-up to capture subsequent childbirth data from a larger proportion of the study cohort. “At the time of the thirty-six month interview, nearly one-third of the women had not yet begun to try to have a second baby, and 14 percent had been trying, but had thus far not conceived,” Kjerulff explained. “Additional follow-up is needed to determine if these women are able to have the second child they hope for.”

Supported by a grant from the Eunice Kennedy Shriver National Institute of Child Health and Human Development, National Institutes of Health, the FBS gives women an opportunity to share their childbirth experiences with researchers interested in understanding the factors that affect women’s choices about childbirth and fertility. As Kjerulff notes, “Participant retention has been remarkably high in the FBS cohort. Over 98 percent of those who enrolled were still participating at one year postpartum. I think women understand that these are important issues to explore and understand.”

Penn State Hershey investigators are working with other researchers in the US and other countries to conduct a variety of ancillary studies, using the de-identified FBS dataset. Kjerulff reports, “Some of the ancillary ongoing studies are looking at the effects of stress during pregnancy on child health outcomes, postpartum depression over the course of the first year, breastfeeding success in early term newborns and factors related to short inter-pregnancy intervals.”