Velamentous cord insertion (VCI) occurs more commonly in pregnancies involving twins, and in women who are older who have undergone in vitro fertilization (IVF) and who may be associated with a higher risk for fetal growth restriction. “With VCI, there is a higher risk for a poor birth outcome, such as pre-term delivery, low birth weight, vasa previa, thrombosis, fetal hypoxia and stillbirth [or perinatal death],” explains William Curtin, M.D., Obstetrics and Gynecology. “In addition, after a vaginal delivery, placentas with VCI are more likely to be retained, requiring manual removal of the placenta or even curettage resulting in postpartum hemorrhage. It is important for the delivering physician to have this information prior to the delivery as excessive traction on the umbilical cord to deliver the placenta may result in avulsion of the cord causing retention of the placenta in the uterus.” 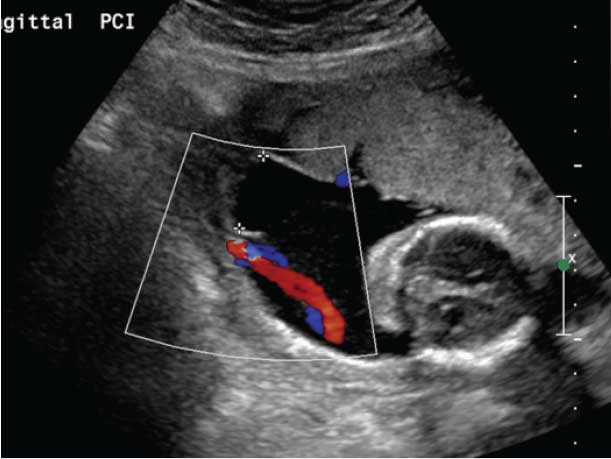 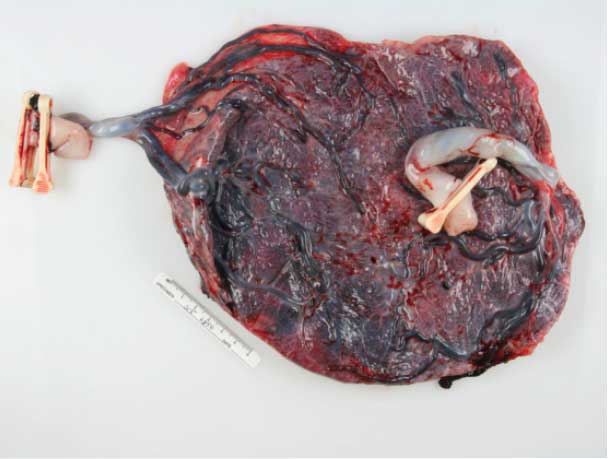 Figure B: Photograph of delivered placenta at 29 weeks. There was twin-to-twin transfusion syndrome with twin B, the donor twin. Note that there is a velamentous umbilical cord insertion (two umbilical cord clamps) belonging to twin B. The umbilical cord of twin A (one clamp) is inserted into the margin of the placenta.

Dr. Curtin notes, “Currently we use Doppler ultrasound, with color flow imaging. I think the cord insertion site is easier to locate with this technology, compared to traditional gray scale ultrasound.” (See Figure A) Identification of VCI depends on the techniques used, the training of the sonographer and the diligence applied in the performance of this part of the ultrasound exam. This raises the possibility that the incidence of VCI, currently at approximately 1 percent, may be grossly underestimated due to technological limitations. Moreover, not all institutions routinely perform a pathologic examination of the placenta in cases with no adverse pregnancy outcomes, and delivering clinicians may not document the placenta cord insertion site upon gross inspection of the placenta after delivery. “Thus, we currently have a gap in our knowledge of how accurate the assessment of VCI is on antenatal ultrasound,” says Dr. Curtin.

In 2013, acknowledging the risks associated with VCI, the American Institute of Ultrasound in Medicine (AIUM) updated its guidelines to recommend documentation of the placental cord insertion site during the detailed fetal anatomic examination conducted at approximately 18 weeks gestation.² Hershey Medical Center ultrasonographers have always recorded placental cord insertion sites during fetal anatomic ultrasounds, and pathologists examine the placenta in all cases with a maternal, fetal or placental indication, placing them ahead of their peers in identifying VCI. Dr. Curtin believes that VCI may be on the rise, explaining, “As demographic shifts occur, with more women having their first child later in life and increasing use of IVF, the potential for more pregnancies involving VCI has also risen.” VCI is thought to be partially due to trophotropism. When the placenta initially implants lower in the uterus, it is necessary to grow toward more vascular areas, leading to the insertion of the cord becoming marginal or velamentous. When umbilical vessels insert onto the membranes, they have lost the protection of Wharton’s jelly, making them at-risk for injury. Risks of VCI are particularly increased among twin pregnancies involving monochorionic placentas (27.4 percent), compared to twins with dichorionic placentas (13.8 percent) or singletons (about 1 percent).1 In twin pregnancies with VCI, there are heightened risks of growth discordance and twin-twin transfusion (See Figure B).

Dr. Curtin adds, “As the AIUM recommendations become more broadly adopted and applied, we expect VCI to be more reliably recognized.” The ongoing retrospective analysis informs health care providers how accurate ultrasound is in the identification of VCI and may provide insight into what can be done to improve its detection.