Lynch Syndrome Screening is Routine in Women with New Endometrial Cancer Diagnosis, Regardless of Age 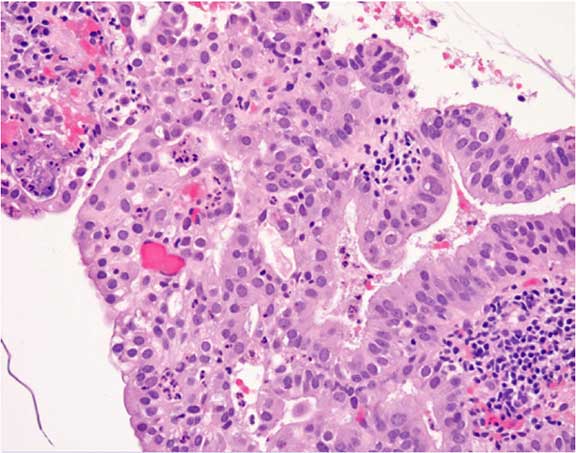 A representative picture of endometrial adenocarcinoma typically associated with HNPCC.

According to Joshua Kesterson, M.D., Obstetrics and Gynecology, “Previously, we screened for Lynch syndrome by assessing personal and family history.” Penn State Health Milton S. Hershey Medical Center’s screening program is in line with the 2014 American College of Obstetricians and Gynecologists (ACOG) and Society of Gynecologic Oncologists (SGO) recommendations for Lynch syndrome screening.¹ Dr. Kesterson explains, “We are now transitioning to universal screening, where all women with newly diagnosed endometrial cancer are screened for Lynch syndrome.” As noted in the ACOG/SGO recommendations, this is the most sensitive approach for accurate detection of Lynch syndrome cases, with the least risk of false negatives.¹

Screening involves a detailed medical and family history with biopsied tumor tissue immunohistochemically (IHC) labelled for mismatch repair system proteins produced by genes that are typically mutated in Lynch syndrome. In patients with Lynch syndrome, expression and labelling of these proteins is absent or dramatically decreased in sampled tumor tissue Dr. Kesterson notes, “IHC labelling of tissue samples can help us identify patients who may have a specific germline mutation.” If IHC labelling is suggestive of a mutation, then germline testing is performed, using a blood sample or cheek swab to directly look for mismatch repair system mutations in the patient’s DNA. “Mutations in the MLH1 and MSH2 genes are the most common and seem to confer a significant lifetime risk of colorectal, endometrial and ovarian cancer,” Dr. Kesterson continues. Other types of cancer associated with Lynch syndrome include, but are not limited to, that of the small bowel, pancreas, stomach and sebaceous glands.

Women with a positive Lynch syndrome diagnosis receive genetic counseling and other family members may be tested. Clinically, patients with Lynch syndrome often report a family history of early-onset colorectal cancer (before 50 years of age), synchronous, multiple cancers in one family member, or a cluster of Lynch-related cancers amongst family members. Lynch syndrome patients are recommended to undergo regular screening for colorectal and endometrial cancer. Dr. Kesterson adds, “Aggressive cancer screening, prophylactic surgery and early detection can be lifesaving for these patients.” To reduce morbidity and mortality, Lynch syndrome patients are recommended to undergo screening colonoscopies, receive an endometrial biopsy every one to two years beginning at age 30 to 35 years, receive ultrasounds to screen for ovarian cancer, and consider a prophylactic hysterectomy and bilateral salpingo-oophorectomy at the completion of childbearing, thus eliminating risk of ovarian and endometrial cancers.