Ovarian cancer, occurring in approximately 25,000 women each year in the United States, frequently presents as advanced disease, with most cases at stages 3/4 at initial detection. Improvements in chemotherapy regimens and cytoreductive surgery have boosted five-year survival rate to about 40 percent. “On average, most of these patients will require two or three additional cytoreductive surgeries over five years, and right now most are managed with conventional open laparotomies,” explained James Fanning, D.O. of Penn State Hershey Gynecologic Oncology.

Minimally invasive laparoscopic surgery is one strategy Fanning and his colleagues are actively employing to reduce the complications and morbidity associated with repeated cytoreduction in their patients with advanced ovarian cancer. “Because a minimally invasive laparoscopic approach is well-proven to lead to less blood loss, postoperative pain, gastrointestinal complications, and adhesions, this type of procedure was evaluated for cytoreduction in patients with ovarian cancer.” In one report of outcomes among twenty-five patients with advanced stage 3/4 ovarian cancer, all of whom had evidence of omental metastasis and ascites, and in whom Fanning performed laparoscopic cytoreduction, disease outcomes were similar to those typically seen with open laparotomy.1

Two of the patients were converted to open laparotomy, due to more extensive or complex metastases. All tumors were reduced to <2 cm and 36 percent had no residual disease. Medians for blood loss (340 cc), operative time (2.3 hours) and postoperative VAS pain (4 out of 10- discomfort) all compared favorably to open laparotomy. The patients spent a median of one day in the hospital for recovery; six (24 percent) patients had grades 1-2 complications. All patients subsequently underwent chemotherapy. After a median follow-up of 1.6 years, nineteen (76 percent) of the patients were alive with no evidence of disease; four were alive but with disease, and two had died of the disease. “What we have observed is that laparoscopic cytoreduction is just as effective for these patients’ [disease management], but presents some big advantages because it leads to fewer adhesions and less scar tissue. This makes future cytoreductions less complicated. Recovery time is also much shorter, with less pain so patients can go back to normal activities sooner and lead a more normal life. Currently, all of our patients who require cytoreduction begin with a minimally invasive approach.”

Fanning’s evidence has been well-received and the positive results have inspired other gynecologic oncology surgeons across the United States to launch their own laparoscopic cytoreductive programs. Fanning notes, “After presenting the data and discussing our work at Penn State Hershey with other surgeons, we now see four or five other gynecologic oncology groups beginning to perform laparoscopic cytoreduction for their own patients with advanced ovarian cancer.” 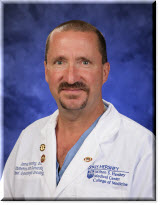