For infertile women with polycystic ovary syndrome (PCOS) or couples with unexplained infertility who wish to become pregnant, fertility treatment is often expensive and invasive, and holds greater risks. Increasingly, couples are being advised to consider in vitro fertilization (IVF) as a front line treatment. “Even though we have effective strategies for inducing ovulation and achieving pregnancy in women with PCOS or unexplained infertility, going straight to IVF for infertility treatment results in high cost and in risky multiple gestation pregnancies,“ explains Richard Legro, M.D., Penn State Hershey Obstetrics and Gynecology. Multiple gestation pregnancies are associated with risks to the mother, as well as the infant, including preterm labor and delivery, infant morbidity, and ensuing financial and personal burden to the parents. Worldwide, rates of twin pregnancies have increased nearly 60 percent, and rates of higher-order multiple pregnancies have increased a staggering 400 percent since 1980, largely ascribed to infertility therapy, including injectable gonadotropins and IVF. Gonadotropin regimens are also associated with increased risk of ovarian hyperstimulation syndrome which can be life-threatening.

Legro says “Penn State Hershey is currently involved with research efforts to identify safer and more cost-effective oral infertility treatment options for women.” These efforts include two nationwide clinical trial programs supported by the Eunice Kennedy Shriver National Institute of Child Health and Human Development, and conducted by Reproductive Medicine Network, a nationwide infertility clinical network devoted to improving infertility treatment. Penn State Hershey has been a site in the network since 2000, and is currently the second longest serving site. The AMIGOS1 trial, which enrolled 950 couples with unexplained infertility and the PPCOS II2 trial, which enrolled 750 women with PCOS, were randomized, double-blind studies that compared the effectiveness of oral agents, including the aromatase inhibitor letrozole (Femara), and the selective estrogen receptor modulator clomiphene citrate (Clomid); the AMIGOS trial also included an injectable gonadotropin arm, and all arms involved intrauterine insemination. One of the main purposes of both studies was to determine whether the oral agents result in fewer multiple gestation pregnancies while maintaining pregnancy success and live birth rates. Both trials are completed and currently in the data analysis phase, with results expected to be published later in 2014. Legro said in an interview “To date, the Penn State Hershey site is the top enroller nationwide for both the PPCOS II and AMIGOS trial among the eleven clinical sites across the United States, which also included, University of Colorado (Denver), University of Michigan, University of Vermont, and University of Texas at San Antonio. Legro was also the lead investigator and principal author of the PPCOS II study for the Reproductive Medicine Network. 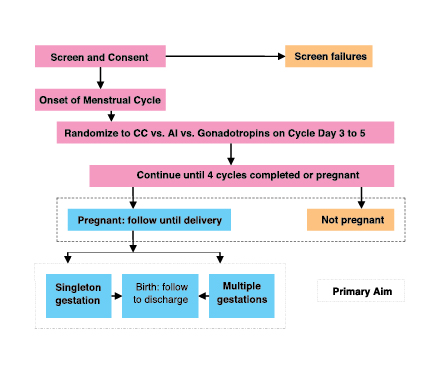 The flowchart above summarizes the AMIGOS study from the NICHD Cooperative Reproductive Medicine Network with its central hypothesis, that use of aromatase inhibitors stimulates the ovaries sufficiently to produce a similar rate of pregnancy, while significantly reducing the numbers of multiple gestations, as compared to stimulation with CC or gonadotropins.

Combined, the trials have enrolled more than 1,500 couples, many of whom have consented to not only receive infertility treatment, but also contribute blood, DNA, and tissue samples from themselves and their infants to help researchers study infertility pathology and biological response to treatment. Legro comments on the upcoming publications from these trials, “The results from these trials will provide critical baseline information about patients with PCOS and unexplained infertility that will advance future research for these conditions. The trials will also yield important efficacy/safety data about oral agents for treating common infertility issues, and hopefully will help the field focus on moving toward more cost-effective, safer options for mothers and infants.”
1 The Assessment of Multiple Intrauterine Gestations from Ovarian Stimulation
2 Pregnancy in Polycystic Ovary Syndrome II