Cancer of the pancreas remains one of the greatest clinical challenges in oncology. With no reliable screening tests and a poor prognosis following identification, the need for novel approaches toward this disease remains largely unmet.

Discovering a pancreatic cyst poses a new set of difficulties. According to Matthew T. Moyer, MD, MS, associate professor of medicine, Penn State Health Milton S. Hershey Medical Center, “Either serial radiographic surveillance or surgical resection is generally recommended for these cysts, both of which have significant limitations. Surveillance is inconvenient and expensive with no therapeutic aspect, while surgical resection is associated with a significant risk of morbidity (20 to 40 percent) and mortality (1 to 2 percent).”

Given these problems, alternative approaches toward cyst management have been explored. Among these, Moyer reports, “endoscopic ultrasound-guided fine needle infusion (EUS-FNI) is an innovative and promising approach. For this, ethanol is infused into the cyst cavity to ablate the pathologic tissue.” The technique has demonstrated modest effectiveness (less than 35 percent) in ablating appropriately selected mucinous lesions1. It’s also relatively safe and well-tolerated, with an approximate 3 percent risk of pancreatitis which is felt to be due to the use of alcohol.

Moyer notes, “Investigators from South Korea have taken this a step further and paired ethanol with paclitaxel infusion2. While this boosted ablation rates to over 70 percent, again some complications possibly related to ethanol extravasation were seen.”Despite these promising findings, the variable rates of efficacy and ethanol-associated complications have limited the widespread use of this technique.

To increase the efficacy and safety of this procedure, Moyer and his colleagues are actively investigating an ethanol-free protocol, using EUS-FNI to deliver a chemotherapeutic cocktail tailored specifically for pancreatic neoplasia (paclitaxel, gemcitabine) into the cyst cavity. His group has recently been granted SRC, IRB, and FDA approval to conduct the prospective, randomized, doubleblind, single-center CHARM trial (Chemotherapy for Ablation and Resolution of Mucinous pancreatic cysts). 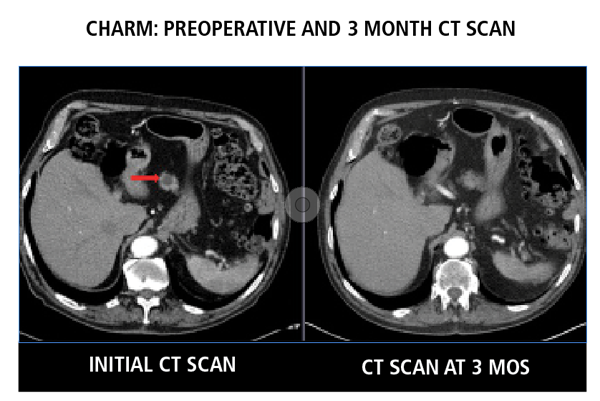 Moyer explains, “We hope to enroll at least seventy-eight patients with qualifying premalignant type cysts. Patients will be randomized either to a control group, which will receive ethanol lavage followed by paclitaxel/gemcitabine infusion, or an experimental group, which will receive saline lavage prior to the paclitaxel/gemcitabine infusion.” Patients undergo scheduled CT surveillance at three, six, and twelve months to evaluate cyst resolution.

Moyer expects that by eliminating ethanol, safety will improve, while choosing chemotherapeutic agents specifically for pancreatic neoplasia will potentially increase rates of cyst resolution. Moyer comments, “We’re excited to launch the CHARM trial and are hopeful that this work will continue the development of EUSFNI techniques that will be more effective with a lower risk profile. If successful, the minimally invasive aspect of the protocol has the potential to become more broadly used for pancreatic cancer prevention in appropriately selected patients.”