Important advances over the last decade in our understanding of gastrointestinal stromal tumors (GISTs) have opened the door to earlier diagnosis, innovative treatment, and improved patient survival. Most often occurring in the stomach, GISTs are thought to arise from the interstitial cells of Cajal, and are marked by mutations in the c-kit proto-oncogene, which expresses CD117, linked to the potential for malignancy.

Raquel Davila, MD, gastroenterologist from Penn State Gastroenterology and Hepatology, notes “Gastroenterologists and surgical oncologists at Penn State Health Milton S. Hershey Medical Center routinely use endoscopic ultrasound (EUS), with or without fine needle aspiration (FNA) for GIST diagnosis and to rule out other diagnoses, such as lymphoma. EUS can delineate the gut wall layers, which is helpful to identify the location of the tumor; a GIST appears as a hypoechoic solid mass, most often in the fourth layer of the GI tract wall, the muscularis propria, and less commonly in the second or third layers [muscularis mucosae and submucosa, respectively].” 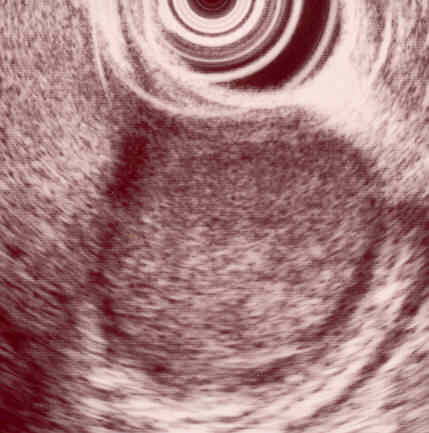 Figure 1: EUS image of a stomach GIST arising from the fourth hypoechoic layer or muscularis propria. The tumor is solid, hypoechoic and has smooth margins.

Tumor samples obtained with EUS-guided FNA then undergo immunohistochemical staining for CD117 or other antigens such as CD-34, smooth muscle actin, desmin, or S100, to differentiate them from other mesenchymal lesions, such as leiomyomas or Schwannomas. Treatment is determined by GIST size, location, mitotic rate and whether there is evidence of metastasis. GISTs that are locally advanced or metastatic, most often involving the liver or peritoneum, are currently managed by use of selective tyrosine kinase inhibitors, such as imatinib or sunitinib which decrease tumor progression and may result in tumor regression.

“For nonmetastatic GISTs ≥2 cm, we perform localized resection in line with current National Comprehensive Cancer Network guidelines. For a gastric GIST of this type, a laparoscopic wedge resection is safe and effective, and there is usually no need for wider resection of unaffected tissue; the resulting small incision is easily closed. After surgery, patients undergo routine CT scans every three to six months over five years, then annually, to monitor for possible recurrence, which occurs in up to 50 percent of cases,” explains Dr. Davila.

GISTS <2 cm exhibit a low risk of malignant behavior, and do not require immediate resection; EUS may be repeated every six to twelve months for these cases. “Even small GISTS <2 cm may require resection if follow-up EUS reveals high-risk features, or if the patient becomes symptomatic,” says Dr. Davila.

Dr. Davila notes, “The goal of GIST management is to prevent recurrence and metastasis. Advances in available technologies for GIST diagnosis, resection, and surveillance, including EUS, have fundamentally improved the ability to achieve these goals.”