For osteochondritis dissecans (OCD) of the knee, avascular necrosis of subchondral bone can lead to fragmentation of bone and overlying cartilage [Figure 1]; osteochondral loose body formation may occur, leading to pain and further articular damage. According to Kevin Black, MD, Penn State Bone and Joint Institute, “The number one goal in treating all patients with OCD is to preserve the articular surface. In skeletally immature children, OCD tends to heal on its own with three to six months of rest and limited activity. In skeletally mature patients, the lesions don’t heal and predictably require surgery.” 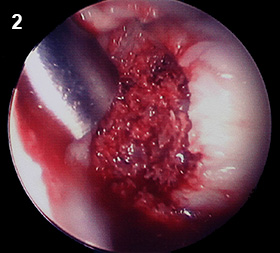 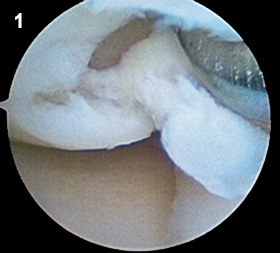 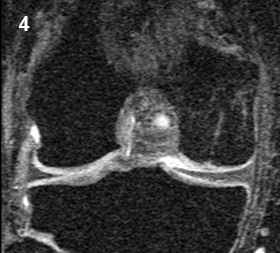 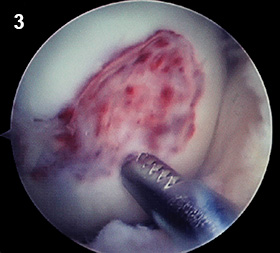 Figure 3: Fibrocartilage beginning to grow over the bone at four weeks.

Surgical interventions depend on the condition and stability of the osteoarticular fragment. For nonrepairable lesions, options typically have included two-stage autologous chondrocyte implantation (ACI), autologous osteoarticular plug transplantation, and osteoarticular allografts. Black notes, “At Milton S. Hershey Medical Center, we’ve begun to examine a more conservative bone graft-only approach for our patients with OCD. This evolved based on findings in one patient who underwent the first stage of repair, receiving an impaction bone graft using allogenic cancellous bone chips [Figure 2] in anticipation of a second stage ACI. The patient felt great afterward and did not want to proceed with additional surgery. She went on to become a two-time state champion in track and ran track for four years in college. In another patient, four weeks after bone grafting, we had to perform arthroscopy due to an unrelated injury and found a layer of fibrocartilaginous tissue beginning to grow over the bone [Figure 3]. At that point, we decided to not perform the planned ACI. Clinically, the patient recovered and returned to normal activity. Follow-up MRI [Figure 4] showed development of fibrocartilage covering the bone. The patient had an excellent result with a full return to normal activity.”

Black has successfully treated eight OCD patients using the cancellous bone chips and impaction grafting procedure, seven with follow-up of at least two years. “Success with the technique depends on introducing the blood supply from underlying healthy bone, which likely helps to support ingrowth of new bone, as well as fibrocartilage growth and repair,” explains Black. Postoperatively, patients use a continuous passive motion (CPM) machine and are non-weight-bearing for six weeks. By eliminating secondary surgery for ACI, the approach is more streamlined and cost-effective. Black says, “Patients have a quicker recovery because repair is carried out in a single surgery and MRI demonstrates a similar appearance to the two-stage bone graft/ACI technique. The single-stage approach is more cost-effective because it eliminates the high expenses associated with chondrocyte harvesting and expansion.”