A magnetically controlled growing rod system (MAGnetic Expansion Control, MAGEC™) was approved by the United States Food and Drug Administration for treatment of early onset scoliosis in February 2014. Used in Europe since 2009, MAGEC provides a nonsurgical distraction alternative to conventional growing rod systems. Douglas Armstrong, MD, Penn State Bone and Joint Institute, and chief of pediatric orthopaedics, Penn State Hershey Children’s Hospital, specializes in treating pediatric scoliosis, and welcomed the new device, explaining, “We currently have 11 patients who have a MAGEC system in place for treatment of early onset scoliosis. The expansion is performed in the clinic every three months, as an office visit.”

The MAGEC system, developed by Ellipse Technologies, Inc. (Irvine, California), is similar to conventional growing rod systems, except that the center of each rod (4.5 millimeters or 5.5 millimeters in diameter) contains a magnetically activated expansion device. The rods are implanted using standard commercially available fixation components, such as laminar hooks and pedicle screws (Figure). To achieve vertebral distraction, the rods are lengthened in the outpatient clinic, without anesthesia, by placing an external remote controller over the patient’s spine at the location of the magnet in the rod. Lengthening and distraction can be confirmed by X-ray or ultrasound. Armstrong notes, “The families are especially happy that their child does not require as many operations and anesthetics as typically necessary with traditional growing rod instrumentation.” 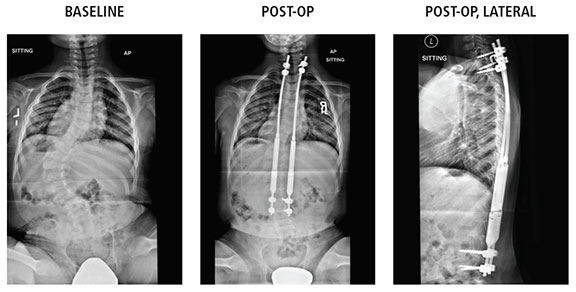 Complications with the MAGEC system are less frequent than with conventional growing rods, due to the nonsurgical nature of the repeated distraction procedures, reducing adverse events related to open surgery. Armstrong adds, “Although the devices have only been used in the U.S. for a little more than one year, it appears that there may be less risk of infection and, in the long run, there seem to be fewer device-related complications. Because of the variety of disease conditions and curve severities and because we are dealing with very young children with small fragile bone structure, one can expect that some patients will experience difficulties during the course of their treatment.” Depending on rod size, number and frequency of expansions, the MAGEC rods are expected to last for approximately 24 to 36 months before replacement is necessary. Most patients will require a definitive fusion at skeletal maturity.

For early onset scoliosis, seen in patients younger than 10 years of age, surgical intervention using growing rods is usually required when Cobb angle is greater than 50 to 60 degrees, to prevent increased curvature, and allow for more normal spinal and thoracic growth as the child matures. A primary concern is to prevent development of pulmonary insufficiency, which is linked to premature death.