A Link Between Foot and Ankle Postoperative Wound Complications and Hypothyroidism

Among the nearly one thousand adult foot and ankle surgeries performed annually at Penn State Bone and Joint Institute, Paul J. Juliano, MD, professor of foot and ankle orthopaedics, noticed what seemed to be a higher than average rate of post-surgical wound complications among patients with hypothyroidism. Juliano observed, “Complications in these patients included not only infection, but also wound dehiscence,” a problem not commonly seen following foot and ankle surgery, marked by opening of the wound along natural or surgical suture lines. According to a number of preclinical and clinical findings, hypothyroidism might contribute to poor wound healing. Thyroid hormone (TH) is a key player in the healing of both bony and soft tissue wounds. In vitro and in vivo investigations have shown that TH promotes endochondral ossification, proliferation of keratinocytes, production of keratin, and dermal thickening; it also appears to play a role in the formation and deposition of mature type I collagen. With hypothyroidism, such underlying pathophysiologic changes could lead to non-union of bony fractures, delayed wound closure, and decreased density and strength of scar tissue. Clinical studies indicate that preoperative hypothyroidism is associated with wound complications after head and neck surgery, body contouring, and vascular surgery. In patients with head and neck cancer, those with hypothyroidism (versus euthyroid patients) experienced higher rates of flap edema, flap necrosis, and fistula development. 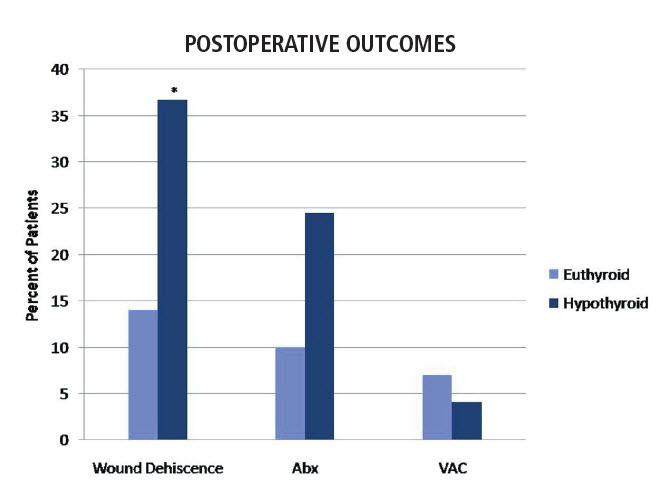 In 2011, Juliano and colleagues published the first detailed report of postoperative wound complications associated with hypothyroidism in an orthopaedic patient population. According to Juliano, “The well-established links between TH and wound healing, along with our own clinical impressions of less than optimal wound healing in hypothyroid patients, prompted us to conduct a retrospective case analysis of postoperative wound healing outcomes.” The analysis included fifty hypothyroid, non-diabetic adults (based on medical history) between the ages of 18 and 80 years who underwent foot and ankle surgery between 2004 and 2007; these were compared to a control group of euthyroid patients who underwent similar procedures during the same time frame. With the exception of hardware removal being more frequently performed in hypothyroid patients, the types of procedures were generally similar between hypothyroid and euthyroid patients and included arthrodesis, osteotomy, and excision of a tumor, mass, or growth. Juliano says that, “After adjusting for differences in age, gender, and vascular or hypertension diagnosis, hypothyroid patients [versus euthyroid patients] displayed a statistically significant, threefold greater, frequency of wound dehiscence [36.7 percent versus 14 percent], most often following arthrodesis.” (see figure)

These findings suggest a need for orthopaedic surgeons to make adjustments in the care of hypothyroid patients to improve postoperative wound healing. Limited, uncontrolled evidence suggests that atraumatic tissue handling, use of Allgower’s modified vertical mattress stitch, and leaving sutures in place for at least three weeks may help to reduce wound dehiscence risk. Patients with hypothyroidism may also require closer postoperative follow-up. The usefulness, however, of aggressive thyroid hormone supplementation in these patients has not been established. Juliano notes that “Future research should aim to prospectively examine the relationship between TH levels and wound healing outcomes in orthopaedic patients.”