“Most strains of HPV do nothing, and others may cause benign disease such as warts. A few strains, however, are oncogenic, meaning they may cause cancers of the cervix, anus, genitals and oropharynx,” Dr. Goldenberg says. “Most people who are exposed to the oncogenic or cancer-causing strains will clear the virus and never develop cancer. Some patients, however, will develop oropharyngeal cancer decades after being exposed to HPV. The cancer almost exclusively develops in the oropharynx: the tonsils, base of tongue and soft palate. It rarely takes place in the throat or mouth itself.”

Oropharyngeal cancer presents differently when it is induced by HPV than when it is related to factors such as tobacco and alcohol.

“Ten years ago, a smoking drinker might have a mass in the neck and a large mass in the oral cavity that would disturb speech and swallowing, while also causing severe pain in the throat, jaw and ear,” Dr. Goldenberg says. “Today, the presentation of HPV-induced oropharyngeal cancer is typically a large, painless mass in the neck with no disturbance in swallowing or speech. Sometimes the primary tumor is visible, but often it is very small or even microscopic.”

This difference in presentation may deceive healthcare providers who are not well-versed in oropharyngeal cancer, resulting in several unnecessary rounds of antibiotic treatment when a swift referral to an otolaryngologist would be more appropriate.

Due in part to increased awareness of the dangers of smoking, the rate of adult smokers in the United States shrank from a peak of 42.4 percent in 1965 to 15.5 percent in 2016, according to the CDC. However, growth in the number of people engaging in sex with multiple partners over the course of their lifetime — as well as misinformation about vaccines and lack of public awareness about human papillomavirus (HPV) transmission — appears to have driven rates of oropharyngeal cancers in the opposite direction, according to a study published in Otolaryngology–Head and Neck Surgery.

“As fewer people smoked, there was a welcome decrease in overall head and neck cancers, but there was a sudden rise in oropharyngeal cancers,” says David Goldenberg, MD, professor and chief of the Division of Otolaryngology–Head and Neck Surgery at Milton S. Hershey Medical Center. “Today in the U.S., at least 70 percent of oropharyngeal cancers are caused by HPV.”

Despite the overall increase in HPV-induced oropharyngeal cancer in the U.S., the incidence rate in women has remained static. In contrast, the rate among men has more than doubled since 1973.

While the public is largely aware of the link between cervical cancer and HPV, not many know of the connection between HPV and oropharyngeal cancer. As a result, few men are vaccinated.

“I am incredibly worried by the fact that people are unaware of the HPV-induced head and neck cancer epidemic,” Dr. Goldenberg says. “That word needs to get out.”

Due to the inconspicuous nature of HPV-induced oropharyngeal cancer, Dr. Goldenberg and his colleagues at Penn State College of Medicine and Milton S. Hershey Medical Center follow a simple dictum: “Any adult with a neck mass should see a head and neck surgeon regardless of the lack or presence of pain or discomfort.

“In an adult over 40 years old, we consider a mass in the side of the neck as cancer until proven otherwise,” Dr. Goldenberg says.

Once oropharyngeal cancer is diagnosed, Dr. Goldenberg works with patients to determine whether surgery, radiation, chemotherapy or a combination of the three is the best treatment.

“The tongue base and tonsil region affects speech and swallowing, and it’s this area that is operated on,” Dr. Goldenberg says. “This can be an important consideration for the patient. The decision about whether to perform surgery is based on the tumor itself, the patient’s preference and the functional outcome we can achieve for the patient.”

In the past, surgery to treat oropharyngeal cancers lasted four to five hours and involved radically invasive measures, such as splitting the lower jaw in order to access the primary tumor for resection.

The adoption of transoral robotic surgery (TORS) led to improvements in that regard. However, the procedures were still significantly invasive for many patients with oropharyngeal cancer.

“We started resecting some tumors of the oropharynx with robotic surgery in 2008, but the tools’ size and linear nature imposed limitations,” Dr. Goldenberg explains. “The upper airway is not a straight line, and that restricted our access to tumors that crept further down in the throat.”

That changed radically with Hershey Medical Center’s acquisition of the Medrobotics Flex Robotic System — the second institution in the country to incorporate this advanced technology. This addition made less-invasive and, for portions of the procedures, minimally invasive surgery a welcome reality for local patients with oropharyngeal cancer and created the potential for other uses as well.

“We acquired the robot in 2016,” Dr. Goldenberg says. “Now, the FDA has begun approving it for more applications, such as transanal and colorectal surgery.”

The Flex Robotic System, by surgical products company Medrobotics, accommodates the natural curves of bodily pathways with a flexible, semi-rigid scope. This scope has a light source, high-definition 3D camera and side ports that allow flexible laparoscopic surgical instruments to reach the tumor easily.

“The scope bends around corners then locks into position once we’ve reached the surgical site,” Dr. Goldenberg says. “It’s smaller and more compact as well, which means we can pass surgical instruments to the larynx without issue.”

Once the scope is positioned, Dr. Goldenberg can remove primary oropharyngeal tumors in as little as half an hour with the flexible instruments that conform to the shape and position of the robotic arm.

Removal of primary tumors is minimally invasive, requiring no outside incisions. While removal of secondary metastases is performed via open surgery prior to use of the Flex robot, employing the robot negates the need for additional incisions or secondary surgical sites — a significant benefit as compared with conventional surgery.

Moreover, procedures involving the Flex Robotic System improve recovery times and can reduce postsurgical pain because patients do not face the challenge of a healing jaw and incisions in the floor of the mouth.

“If we split the mandible, the patient would be in the hospital for a week or more,” Dr. Goldenberg says. “Now, we usually let patients go home the next day after using the Flex robot.” 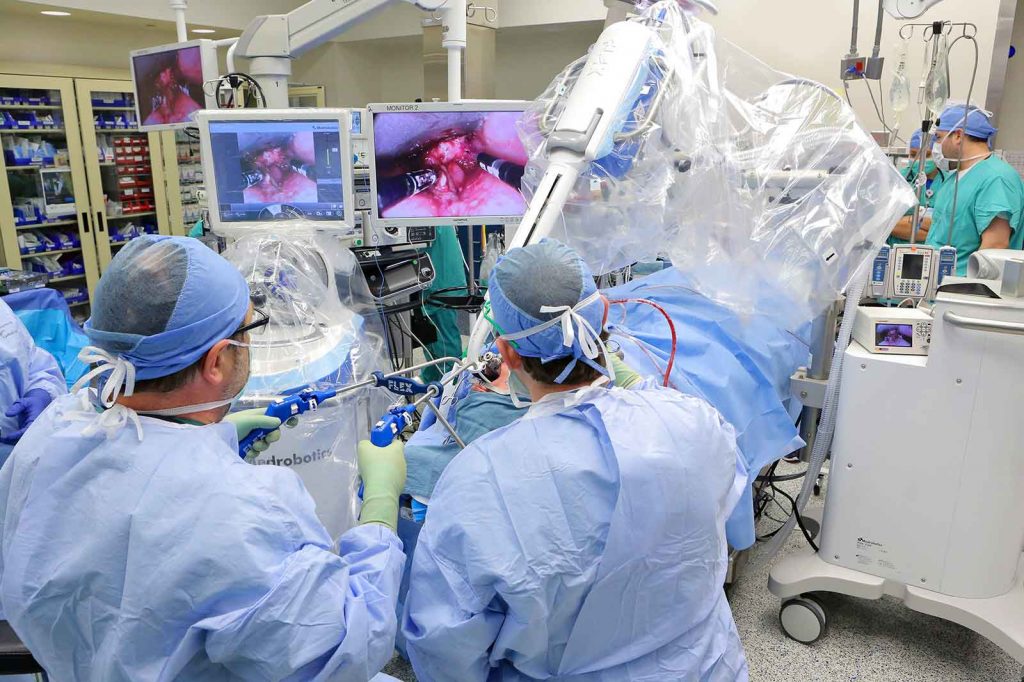 Patients with any form of head and neck cancer are candidates for Flex robotic surgery. However, those with oropharyngeal cancers caused by HPV enjoy better survival rates and outcomes when compared with patients whose cancers are induced by smoking, drinking or both.

Additionally, HPV-induced oropharyngeal cancers are less aggressive and more manageable overall than those that are not HPV-related. That, combined with the younger demographic of patients who develop the condition, makes primary surgery with the Flex Robotic System — alone or in combination with radiation and chemotherapy — an especially effective treatment modality for patients with HPV-induced oropharyngeal cancer.

“This disease lends itself to surgery, especially given the fact that most HPV-induced head and neck cancers are very small — typically millimeters in size,” Dr. Goldenberg says. “Hershey Medical Center is the only hospital in the region that offers the Flex robot for these types of procedures, which means local patients don’t have to travel far for treatment.” 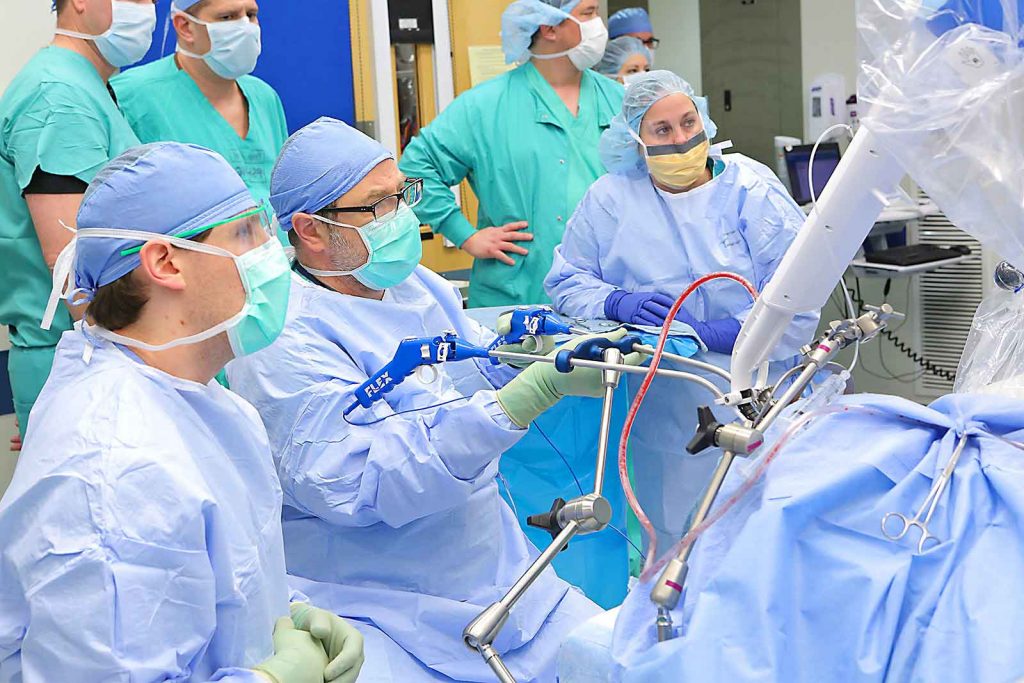 Hershey Medical Center surgeons who utilize the Robotic System have undergone extensive training by the robotic company as well as proctoring by a surgeon who has performed multiple procedures with the robot. The surgeons are re-evaluated by the hospital after completing a number of procedures of their own using the device.

“I’m very proud of the fact that if there is a new treatment or technology, Hershey Medical Center is eager to adopt it and contribute to research in the field,” Dr. Goldenberg says.