During the procedure, Gniady inserts a laryngoscope through the nose down into the throat. Then, the vocal cords are treated with a topical numbing medication, making them less reactive. Using a video screen as a guide, the laser fiber is then passed through the working channel of the scope.

While not all patients are candidates for an in-office procedure, for many, the benefits are significant.

“The main benefit is being able to take care of pathology on the vocal cords without the additional time, risk and costs associated with procedures done in the operating room under general anesthesia,” Gniady said. “This can be a huge factor for patients with other medical problems that put them at higher risk for general anesthesia.”

Gniady also noted that patients who require many surgeries over their lifetime, such as those with recurrent respiratory papillomatosis (RRP), a viral disease that many patients contract at birth, may reap the biggest benefit. 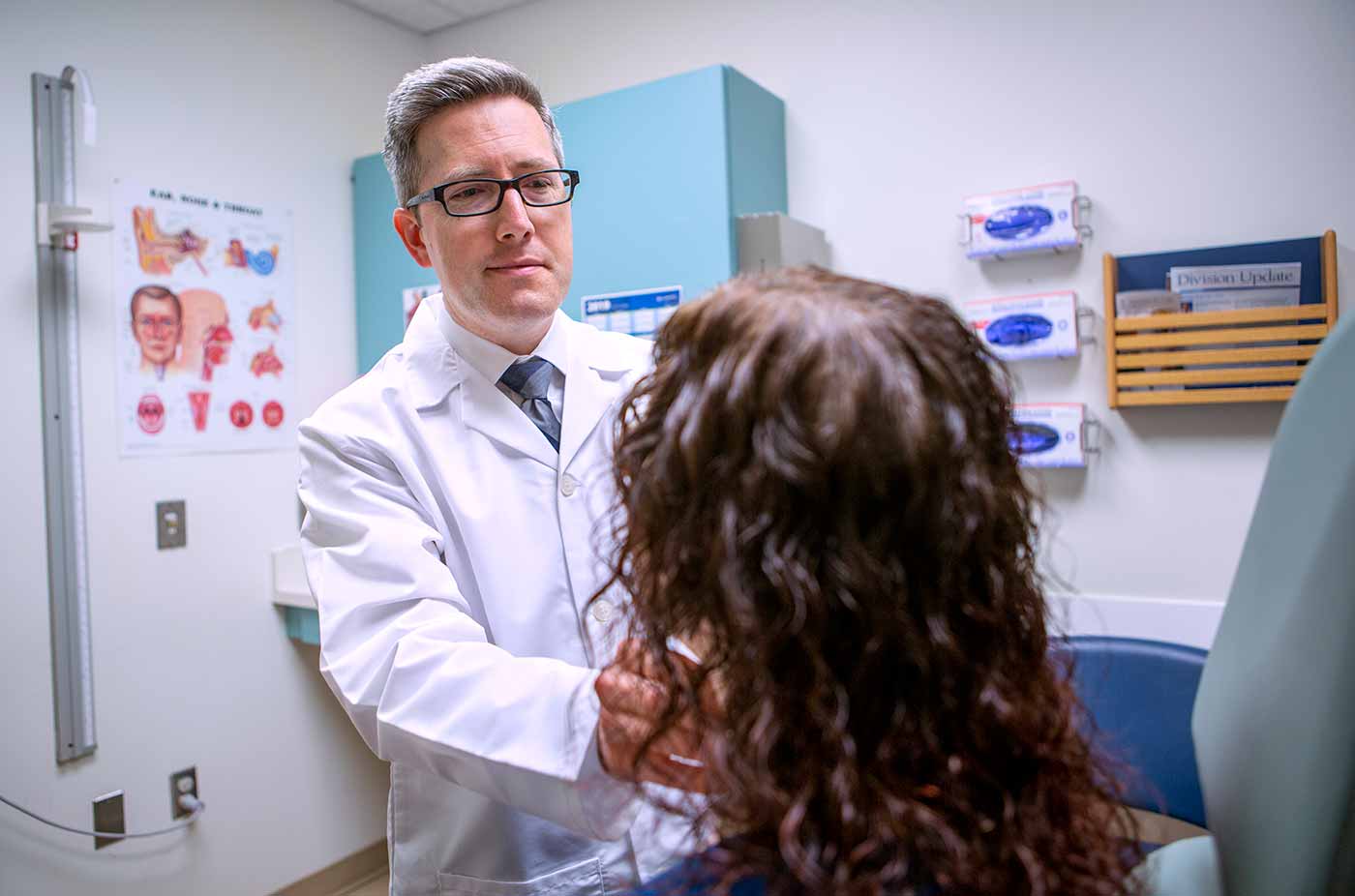 Dr. Gniady uses a laryngoscope to perform an in-office laser procedure on the vocal cords.

“We have patients who have had well over a hundred surgeries on their vocal cords over their lifetime for RRP,” Gniady said. “Having the ability to convert many of those surgeries to office-based is a tremendous benefit to those patients.”

Avoiding major surgery also means a shorter and easier recovery period, and the patient avoids the side effects that can come with general anesthesia. Pain is also minimized and many patients require no pain medication or voice rest.

“Most importantly, we avoid the foggy, nauseous period that many people experience in the 24 to 48 hours following general anesthesia,” Gniady said.

Additionally, performing procedures in-office can accelerate the diagnostic and therapeutic processes.1 This leads to high rates of patient satisfaction. Studies have found that 93% of patients would be willing to undergo an in-office procedure more than once. 2

Office-based laser treatment is appropriate for most adults with a qualifying condition. The main eligibility factors include having a nasal opening that can accommodate the scope and the ability to tolerate the in-office exam. Nasal decongestants and topical numbing medication in the nose make the exam manageable for most patients, even those as young as eight years old. However, patients with an aversion to local anesthetic due to past experience or lack of familiarity may not be suitable candidates.2

General anesthesia poses the biggest risks when performing operative procedures. On the other hand, in-office procedures eliminate these risks, including the nominal chance of fire in the operating room when using a laser in an oxygen-rich environment. Studies have revealed that in-office laser procedures have low rates of complication and successful patient outcomes.3

“We do lose a slight degree of precision by the fact that the patient is awake and breathing and therefore moving a bit,” Gniady said. “But our laser is rather forgiving in that its energy is selectively absorbed by the types of pathology we use it to treat and not very well absorbed by normal healthy tissue on the vocal cords.”

Gniady has been performing laser procedures since 2012, joining Penn State Health in 2019. After a delay in the onset of the program caused by the pandemic, he is excited to now be able to offer this procedure to patients at Milton S. Hershey Medical Center.