What impact does early diagnosis of multiple sclerosis have on patient outcomes compared to late diagnosis? Researchers recently released some preliminary answers in a new study published in the journal Neurological Research that suggests the criteria currently used to diagnose MS may be the bigger question.

“Most of the research from the past 10 years has said that MS patients who are treated earlier have better outcomes as far as their EDSS score, which means less disability in the next 10 years to 15 years,” said Dr. Jikku Zachariah, neurologist, Penn State Milton S. Hershey Medical Center and assistant professor, Department of Neurology at Penn State College of Medicine. “We agree with that concept, but during our research we found that it’s really based on the definition of what’s an early attack.”

The heart of the study

Classic MS often first presents and is diagnosed after the onset of a recognized clinically isolated syndrome (CIS), where neurological signs and symptoms last at least 24 hours. Zachariah and his colleagues aimed to determine whether or not MS patients presenting soon after the onset of symptoms with CIS have an identifiable clinical profile, including worse outcomes, versus MS patients presenting later.

“Usually, all the clinical trials have included patients with classic CIS symptoms, which includes patients who have optic neuritis, partial myelitis and brainstem syndromes — classic symptoms of MS,” Zachariah says. “And these patients, when treated early in the progression of the disease, tend to have better outcomes.”

The researchers looked at a cohort of 207 patients who first presented with MS from 1989 to 2005 and followed their progress through 2012. A little more than half of the patients were in an early presentation (EP) group after a CIS, while the other half were later presenters.

“We included patients who have prodromal symptoms or patients with mild, nonspecific symptoms, such as fatigue, depression and some pain — things that likely would not qualify them for MS clinical trials,” Zachariah said. “However, when we included all those patients in that early presenting group and compared it to the patients who were presenting to the late presenting group, the outcomes were similar in both groups after 10 to 15 years.”

What the research means

The researchers were surprised to find little difference in long-term outcomes between the two groups. Early presenters were much more likely to have frequent attacks specifically in the two years after the onset of MS.

“Patients in the early presenting group did have more severe disease — meaning more relapses and more attacks — early in their life compared to the people in the late group, which had more of a benign disease,” Zachariah says. “People who have aggressive MS will have more relapses and should be treated more aggressively and referred to an MS clinic as soon as possible.”

Yet despite early and aggressive treatment, outcomes did not improve the long-term prognosis of patients. The study ponders, “Perhaps a combination of the known risk factor of high, early attack frequency and other unidentified risks were offset by early treatment in our EP group to mask the benefit of early treatment.”

The researchers were also surprised that the later presenting patients — most of whom had been misdiagnosed for years — still had similar outcomes.

“Even though treatment did not change outcomes, these patients should be diagnosed, as the importance of having a diagnosis and then serially following these patients is important,” Zachariah said. “In general, we think we need to treat everyone early so that they will have the same prognosis at 10 to 15 years.”

Zachariah hopes the research will have diagnostic and clinical implications for future MS patients.

“All the clinical trials for all the new drugs enroll only patients with classic MS symptoms,” he said. “But there could be some benefit to enrolling patients with milder symptoms, too.”

The study found that later-presenting patients often had five to 10 years of prodromal symptoms like fatigue and generalized weakness before getting a diagnosis of MS.

“They had been going to doctors for years, but the diagnoses were continually missed,” Zachariah says. “While their MS may not be as aggressive as early presenting patients, and they may not need the same types of medical treatment, we have got to figure out a better way to get answers for these patients who have these nonspecific symptoms.”

The later presenting patients had also billed significant amounts of insurance claims from seeing so many medical specialists before getting a diagnosis. The study found that hospitalizations and insurance claims increased between 24% and 26% within a period of five years before patients experienced their first classical demyelinating event.

“Other physicians should be more aware that MS can present with other nonspecific symptoms than the classic ones like optic neuritis and partial myelitis,” Zachariah said. “Increased awareness of prodromal symptoms like severe fatigue and unexplained fevers is something that primary care doctors should keep in mind so we can better diagnose MS early in all patients.”

As the only dedicated MS clinic in central Pennsylvania, Penn State Health is at the forefront of treatment.

“My plan next year is to launch an MS Pathway Clinic, where we have more of a nuanced approach to early diagnosis and treatment,” Zachariah said, noting the use of neurofilament lights as biomarkers to help with earlier diagnosis.

“We plan to work with regional physicians for referrals to better diagnose patients early and start them on a treatment early because, as our research shows, these are tough diagnoses that can get missed in the community.” 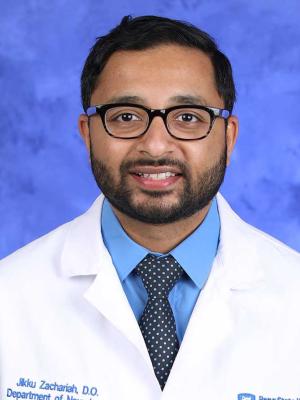